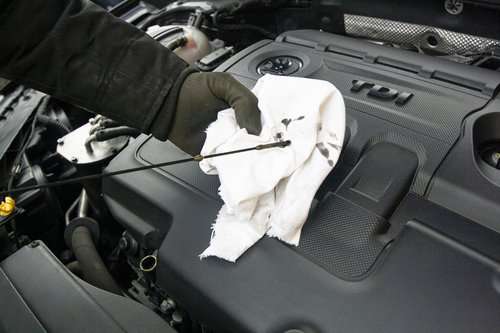 That puddle could be any other engine fluid. For example, power steering or brake fluid. Perform a white cloth test to identify what it could be.

There are other signs that may indicate that your engine oil is spilling. I have prepared a list of five areas that will serve as a hint for the same.

Oil acts as a lubricant for engine parts hence preventing friction between grinding engine parts. Apart from friction reduction there are a number of functions that car engine oil serves.

There is no underestimating the importance of car engine oil in relation to excellent engine functionality. So if oil is dripping from your car, there is the probability of engine malfunction. Which will lead to engine repair costs.

Oil is one of the car engine cooling system components. Well, this is justified by the fact that it plays a great role in the reduction of friction.

Oil circulates the engine from the pistons to the filter and then it is recirculated again. When it moves from the pistons, the oil carries with it a collection of particles and heat.

The oil lubricates the pistons to reduce the amount of friction. The lubrication allows the pistons to glide smoothly over each other. But as a result of this gliding, there will be heat production. So, what happens is that the oil carries that heat away from the pistons during circulation.

What about the particles?

There are particles that are drawn into the engine depending on the driving environment. These are also a heat enhancement factor. Based on the fact that they contribute towards increased friction. Some of the additives found in the best oil brands allow easy cleanup of those particles.

So if your engine is overheating, it could be a sign that there is an oil leakage. But there are other things that could cause your car engine to overheat.

There is the probability that your exhaust pipe is producing some white smoke which isn’t alarming. Especially in the morning when you first start the engine. The smoke is usually almost misty.

This is absolutely normal.

But when there is an oil leakage, the amount and color of the smoke is unusual. It is a chocking white smoke that can even blind the driver behind you.

Do not ignore this.

It comes about due to the fact that oil is leaking into the combustion chamber or exhaust manifold. The oil will result into poor fuel economy because of incomplete fuel combustion. Further, the white smoke coming from the exhaust pipe could also damage the oxygen sensor.

For me, the car’s dashboard is such an interesting subject. It gives the driver access and control to the different elements of the vehicle. Additionally, it offers up information relating to the vehicle’s conditions through an On-Board Computer.

What’s the reason for this?

If the engine’s oil pan reservoir is running low on oil, the computer will detect a reduction in oil pressure. Meaning that the oil won’t be reaching the engine pistons.

The oil may be leaking onto engine parts that heating up. This will cause the oil to sizzle while produce a burning smell. Because oil is a good heat conductor, it will produce fumes during the burning. These fumes will enter the car’s cabin and alert you that something is wrong.

Constant oil checks count as good practice before leaving for your destination. It will save you a great deal in time and costs. In fact, undertaking regular oil checks counts as one of the car maintenance best practices.

Open the engine’s hood and remove the deep stick and check the oil levels. Do this before turning on the engine after parking the car for a number of hours. The passed hours will give the oil some time to settle after circulation.

The deep stick is made with two markings that will show the level of oil. The top mark of the dipstick is the highest level of oil. While the bottom marking is where the oil levels shouldn’t go below.

If you have insufficient oil, it could be caused by a leakage. But if none of the things we have mentioned has happened, you probably just need an oil refill.