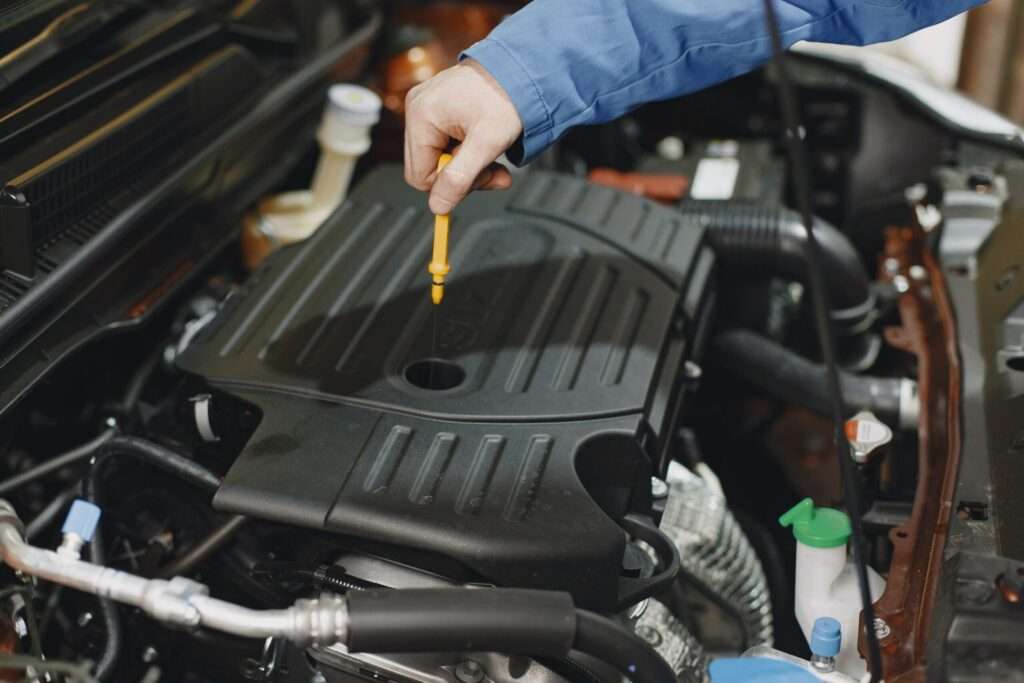 Oh well, car engine oil leakage is such an unfortunate situation. Especially if this goes on for too long without being noticed. That’s because the engine needs it’s engine to function properly.

Car engine oil is very important as it performs a variety of important functions that keep the engine operational.  Inclusive of preventing engine damage by offering protection to the engine parts. The oil creates a coating over engine metal to protect it from rusting and corrosion caused by combustion gases.

There is the possibility that if the color of the fluid beneath your car is black, it is probably oil. Make it a habit to check the ground beneath your car where you have parked before driving away. Because it’s possible the oil is leaking when the car is parked after a drive.

Once you notice that oil is leaking, it is advisable to use the dipstick to confirm that there is sufficient oil in the engine. In fact, performing regular oil checks is a car maintenance best practice. If the oil levels are too low due to leakage, just top up before driving off to a professional for check-up.

Alternatively, you can check a few of the car engine oil leakage causes we are about to list here. They will form your bases for starting an investigation into why the oil is leaking.

Issues with the oil pan gasket can lead to car engine oil leakage . Given that the oil pan acts as the oil’s reservoir, it may get damaged due to suffering direct impact. Direct impact from the road terrain elements may damage the oil pan.

The extent of the damage to the oil pan will determine how much oil your vehicle will loose. That’s because the oil pan gasket helps to seal the oil inside the oil pan. If it’s not too damaged, the oil leakage could be minimal. A new oil pan may be necessary if the damage is too extensive.

Alternatively, the problem could be caused by a faulty oil plug sealing. The sealing could suffer damage during a routine oil change.

Additionally, the seal could be damaged if it has been functional for too long and it isn’t changed during the oil change.  Another oil leakage that could originate from the oil drain plug takes place when the sealing isn’t properly fitted after an oil change.

Oil leakage that comes from a damaged oil filler cup isn’t much of an emergency. In fact, it is one of the easiest to correct amongst the causes of car engine oil leakage.

Further, the oil filler cap may degrade due to a worn out rubber seal that helps to keep the cap in place.

If oil leakage is taking place due to the oil filler cap, you will notice a puddle of leaking oil from the front of the vehicle. Right underneath the engine. That is, if your car’s engine is located at the front.

There is a common question that baffles most car owners. That is; if the oil filter should undergo changing whenever there is an oil change.

Here is some insight.

The oil filter is an essential part of the oil system in the engine. It’s roles include cleaning up the motor oil before it is recirculated into the engine block.

The ease with which this task is accomplished depends on two things. The technology used by the type of oil brand you are using. Some oil brands include strong additives like detergents and dispersants reduce the accumulation of particles within the oil.

Secondly, the condition of the oil filter to be effective in the oil cleaning task. It is advisable to undertake a change of the filter during an oil change for car maintenance.

The oil filter quality degrades over a certain number of miles. By degradation we mean that the filter may become loose in its position as well as clogged.

If the car engine oil filter isn’t in the right condition, it will lead to spurting of the oil. The leakage repair costs associated with this issue will only involve the price paid for a new filter and the labor.

When the car engine oil is leaking due to the presence of an excessive amount within the engine block, it could damage essential engine parts.

The excess oil will flow into areas of the engine where it shouldn’t. For example, the excess oil could flow into the combustion chamber where it will cause a white smoke to be produced. This will lead to poor fuel mileage. This is one of the oil leakage symptoms.

One common symptom to indicate that the valve cover gasket is causing oil leakage is when oil is leaking from the top. The function of this part is to protect the parts inside the cylinder head.

The cover gasket is useful in separating the cylinder head and the valve cover. It is common for the valve head to degrade over time and causing the seal to be less effective. In this occasion, you will see the car engine oil leakage on the right side of the engine because it could be flowing from the top side.